Our 2020/21 financial year has just ended, so we’re writing to update you on the progress of M&S Energy Society since our Annual General Meeting held at the end of March earlier this year.

In our 2020/21 financial year, ending on 30th September 2021, we have generated about 675,958kWh of renewable electricity in this year, all of which has been used by the host Marks & Spencer stores. This has reduced carbon emissions by about 236 tonnes (using the grid average for carbon saved through reducing gas fired electricity generation – which is what our solar panels do).

Generation in 2020/21 is 5.4% down on last year. As you will all know the summer of 2021 was a particularly cloudy one which has impacted the solar generation. This resulted in pretty much all the sites falling short of last year’s generation figures.

Inevitably each site has had its own operational issues during the year, but the majority of the reduced output is weather related.

Details of generation by store are set out in the table below. 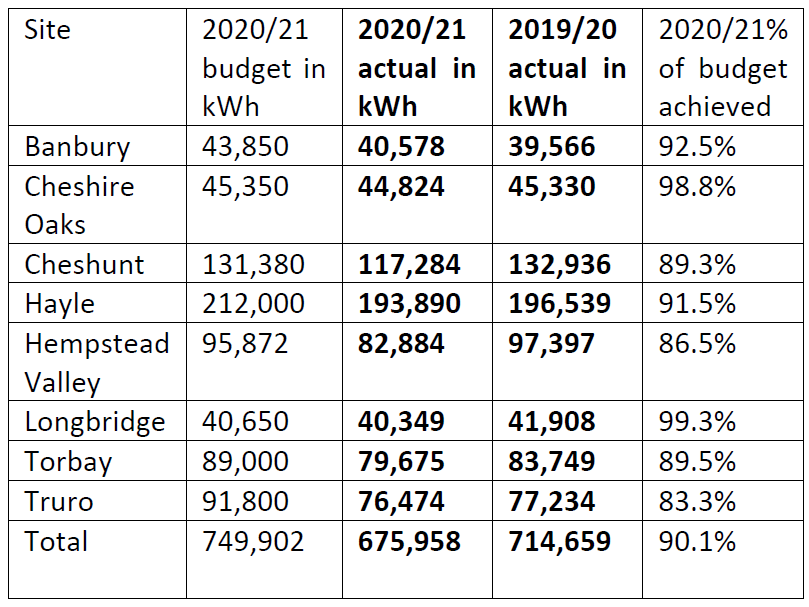 Our financial performance remains positive and we have delivered to members the target interest payments and will be repaying members their investment in the Society in accordance with the original plans. The Society continues to contribute to renewable energy for M&S and with the share capital being repaid thereby reducing interest levels we are in the early stages of building up the community benefit fund which is a key part of the Society’s mission.

The lower generation rates mean that the financial performance for the year has been below that of last year resulting in a reduced surplus. We intend to pay interest to our members at the rate of 5.55% for the year, in accordance with our original target. We anticipate paying interest later this month. Interest paid will be paid on members current shareholdings before the effect of redeeming share described in the next paragraph.

We will continue to return capital to members, as described in the share offer, which indicates that we will continue to redeem 5% of the shares annually for the next 15 years. Members will receive a separate letter or email from us about this describing the procedure. We intend to redeem about 5% of our share capital and return that money to members, giving priority to those who wish to redeem some or all of their shares and redeeming the balance of shares in proportion to members’ shareholdings. We anticipate that payment to members on the shares redeemed will be made next month.

Annual General Meeting – 22nd March 2022: please keep the date free. We will decide the format next year. Zoom certainly allows more people to participate, but it would also be nice to see our members face to face.

My thanks to M&S for their continued support and also to all the staff at Energy4All who conduct our administration with such ease and efficiency.

Thank you all for your continued support during the year, and do please contact us if you would like more information or wish to discuss any issue relating to your Society.

The Society was registered on 8th April 2015 by the FCA with registration number 7101.

By continuing to use the site, you agree to the use of cookies. more information